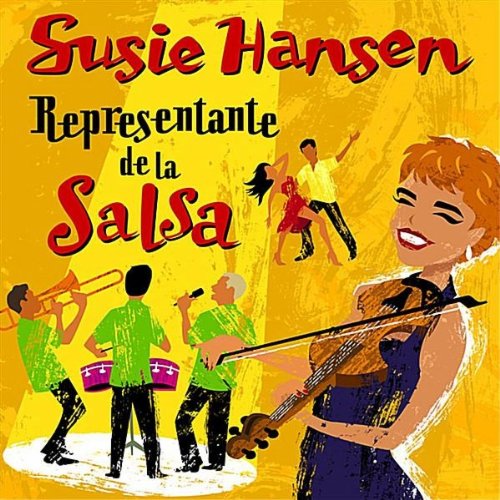 From the Liner Notes by Don Heckman, International Review of Music.

Strange though it may seem for the title Representante de la Salsa to be claimed by a slender blonde playing a five-string electric violin, leading an all-male band of Latin jazz veterans, the proof is in the music. And the music in this collection is a scintillating display of what Susie Hansen loves and plays best Salsa and Latin jazz.

The first time I saw Susie in action, leading her Salsa band in a rhythmic set that was setting even my non-terpsichorean feet into action, I knew she was something special. The tunes and the rhythm and the sheer energy of the music she was creating, moving lithely in front of the band, were more than enough to prove that fact. But it wasn t until I found out more about her, that she was a Chicago girl with a classical music background and a pair of Master s degrees in Electrical Engineering from MIT, that I realized how unique Susie really was.

One of the fundamental givens about Latin jazz has always been that it is fueled by a simmering undercurrent of dance rhythms. Whether it was Tito Puente, Los Van Van or Poncho Sanchez, the elements of jazz and Salsa seem almost symbiotically connected. In this case, the dance element was what led the way in the planning of Representante de la Salsa.

I wanted to keep the connection with jazz that's always been basic to my music, says Susie, while moving in the dance direction. We included a couple of instrumentals, and lots of soloing on every track, while still making it a total Salsa album.

I always tell arrangers, explains Susie, to think of this as a three-horn sound, trumpet, tenor and trombone, but the electric violin, not the trumpet, plays the lead voice.

A pair of instrumentals, Si No Contigo and Las Calles de Chicago (a tribute to her hometown written by Hansen and producer Erich Bulling), swing hard. For some exciting soloing, listen to Joe Rotondi s jaunty piano solo on the former, Susie s soulful violin and Stout s fervent trombone on the latter.

And the dance card is always present. Songs such as the only Charanga in the set, No Te Metas Conmigo, the Salsa Dura Y Sigue Pensando (another original by Hansen and Bulling), the pop-style I Want to Love You (sung with sexy intimacy by Susie and Kaspar) and the classic Beyond the Sea, have an inescapable ability to keep the body moving and the blood flowing.

Balmaseda dips into his rich baritone for the floating lyricism of the love song Te Quiero, Te Amo. One track that has it all is Frank Sinatra Cha Cha Cha, which manages to combine four standards from the Great American Songbook, feature vocals by Abbo, Hansen and Balmaseda, toss in nice solos from tenor saxophonist Tim Messina and trombonist Stout, and do it all over an infectious dance rhythm. Susie s duet with Abbo on All of Me and her convincing vocal version of It Could Happen to You testify to yet another facet of her colorful array of talents.

The Susie Hansen Latin Band's new CD, Representante de la Salsa, is on fire and tailor-made for salsa dancers.pgt; Violinist/bandleader Hansen is a long-time favorite in Los Angeles, where she conducts an average of 150 live performances per year. A native of Chicago, Hansen is currently celebrating the twentieth anniversary of her band, as well as the release of her third CD. This well-established artist has developed a trademark style that features her electric violin as the lead melodic instrument of a powerhouse ensemble. Drawing from various forms of jazz and Afro-Caribbean rhythms, Hansen and her band play hardcore salsa and Latin jazz guaranteed to make any audience get up and move. As Susie states: "We aim for the feet!"

The West Coast is very lucky to have violinist-composer Susie Hansen, who consistently releases finely crafted and highly swinging dance material. On her new project Hansen orchestrates a repertoire that consists of salsa, charanga, Latin jazz, and a very classy extended cha cha cha medley of Sinatra covers. The compositions mix Spanish and English lyrics, often within the same song. Great job by singers George Balmaseda, Kaspo Abbo, and Hansen. Listen to the killer "No Te Metas Conmigo," a red hot charanga number that is one of my favorites here. With bassist Rene Camacho, Jimmy Branly on timbales, pianist Joe Rotondi, and others. First rate stuff, this.

My Cart
You bring the imagination. We bring the craftsmanship.

DESIGN YOURS
Our Men's Oxford Shoes, the cornerstone of every shoe collection.

ORDER NOW
Our Men's Dress Sneakers, the heritage of a classic shoe coupled with the audacity of a sneaker.

A traditional way of crafting, a contemporary way of purchasing

The word is out

Since launching in 2015, Undandy has made its mark as a leader in customisable, handcrafted men's dress shoes.
The genius of the Undandy website is that it allows you to design exactly the shoes you want (...) Every element of the shoe can be customised, including colours and fabrics and the opportunity to add a personalised engraving.
Portuguese shoe brand Undandy is combining the country's shoemaking heritage with the last digital technology.
I've tried other custom clothing e-tailors but Undandy's technology so far beats them all. Think of Undandy as custom shoes for everyday. Build them online but wear them anywhere. Until something better comes along. I can't imagine buying a pair off the rack again.
Get in touch
May we be of assistance? There is nothing that we love more than helping our customers find their sole mate. Whether it's fit, function or just to get better acquainted with Undandy, we're here to help.
Email
We're delighted to converse over emails. You shall be responded to within 24 hours, and a gentleman never breaks a promise.
customercare@undandy.com